Stay in a Comfy King room and receive:

Stay in a Luxury Super King room and receive:

Stay in a Splendid Super King room and receive:

Stay in a Master suite and receive:

All of the above prices include all taxes / service fees.

Treat yourself to a relaxing treatment of your choice in one of our newly developed treatment rooms at Barnett Hill Hotel. Take time to embark on an intimate journey with the Mediterranean infused Temple Spa treatments. Why not indulge in the signature treatment - Total Harmony - for a Utopia experience to die for?

Mountain bikes are available for hire - just ask the team for a guide to the best cycle routes in the area, including the 2012 Olympic road cycling route.

Guildford Golf Club can be reached in 15 minutes. 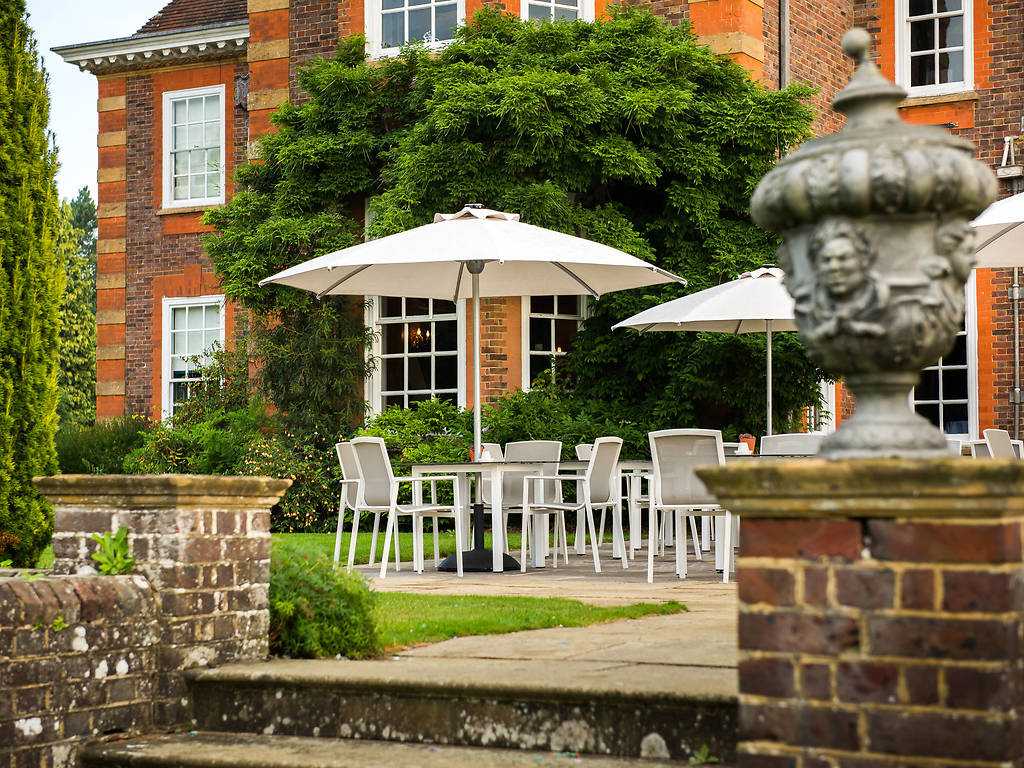 There are limited ground floor bedrooms within the courtyard which is not in the main hotel, some of which are fully accessible. Please call our reservations team to enquire prior to booking

Barnett Hill Hotel was once nothing more than a wooded hilltop, which offered impressive views across the Surrey hills. The stunning location caught the eye of Frank Cook, grandson of renowned travel agent Thomas Cook, who, in 1905, constructed the Queen Anne-style mansion as a family home.

Following his death in 1940, Cook's wife loaned the house to the British Red Cross as a convalescent hospital during WWII, and it became a rehabilitation centre for civilians injured in bombings. Four years later, Mrs Cook sold the house to the Red Cross who turned it into their National Training Centre.

In the 1970s, the British Red Cross opened the house to the public, offering independent training courses and promoting Barnett Hill as a conference venue. In 1996, the house was leased to the Chudley family, the owners of Highgate House, the UU's first conference hotel. They went on to purchase Barnett Hill in 2005 and expanded their offering to include accommodation, dining, weddings and private events.

We bought the property in October 2016 and transformed the hotel's interior, modernising our guest facilities. The Grade II listed hotel still holds many of its original features, including the summer house and tea house.

The packages are both single and double occupancy rate.

Extra beds for children are charged at £40 per child per night inclusive of breakfast.  Extra beds can be accommodated in some Luxury rooms and above.  Please contact our team before booking.

Dogs weighing under 15kg are welcome in certain room types, a charge is applicable.  Please call 0333 2125 594 to check availability for your stay

Not only do they have a beautiful 26 acre estate at their disposal, the estate sits at the edge of the Surrey Hills Area of Outstanding Natural Beauty.

The Rooms at Barnett Hill Hotel

Bold decor, feature fireplaces and cosy seating areas combine to create a relaxing haven in the Comfy King Rooms. Complete with a selection of modern magazines and a beautiful en suite bathroom, our Comfy King Rooms have everything you need to unwind in the beauty of the Surrey Hills. 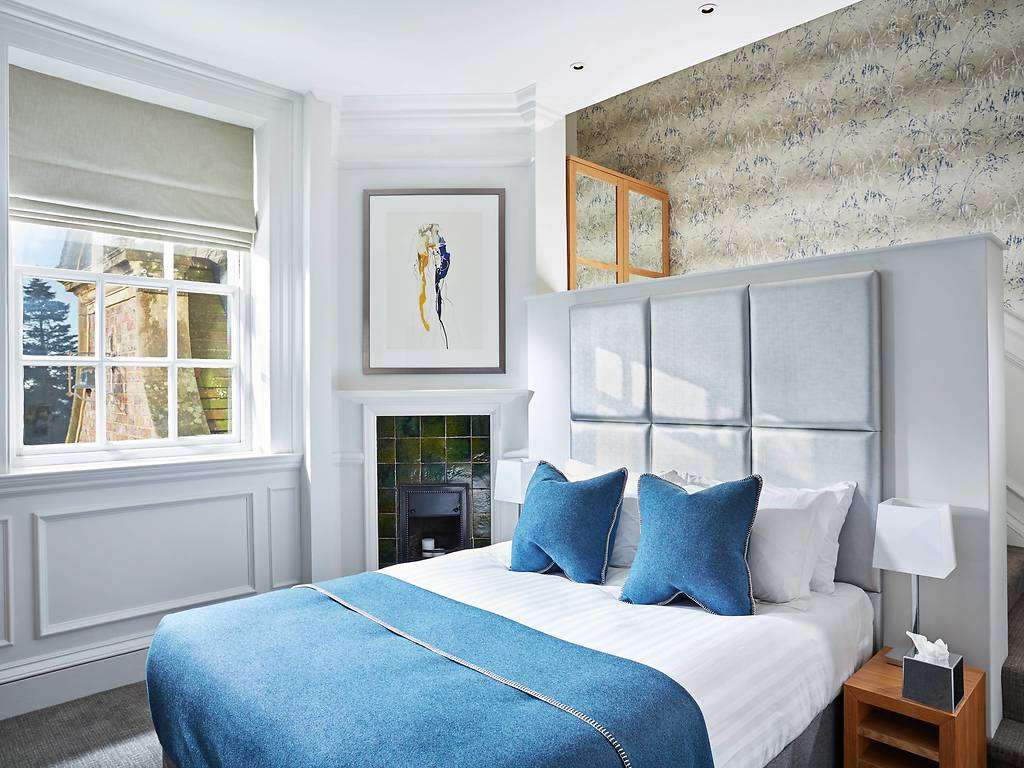 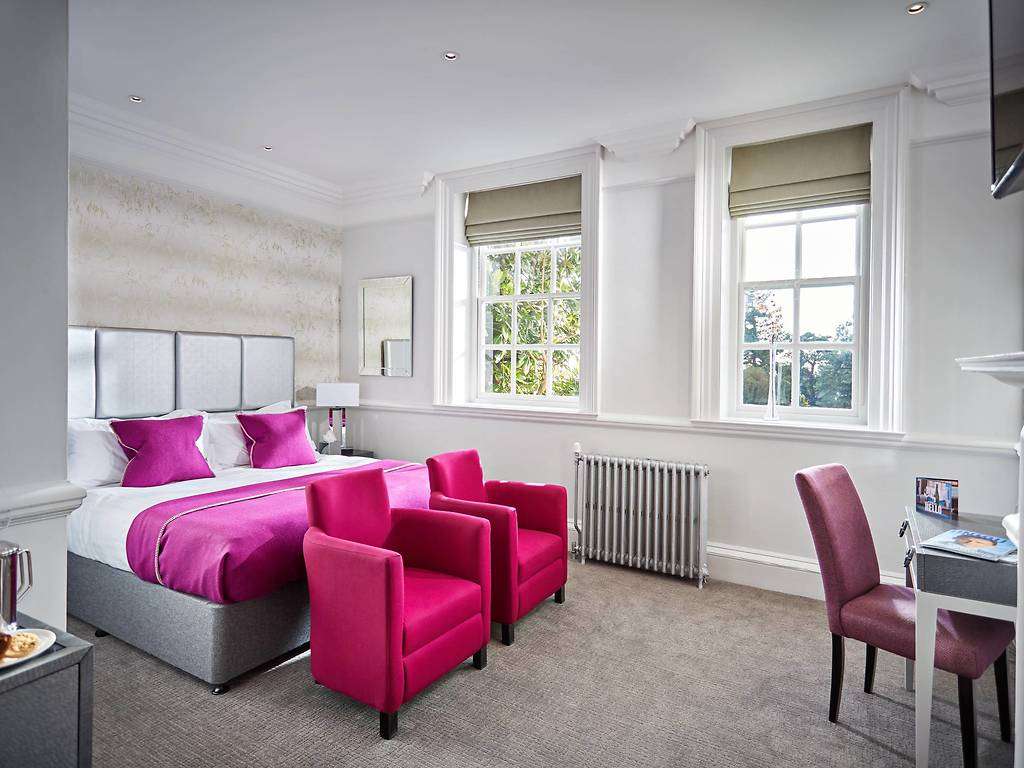 Recline on the sofa, sink into Egyptian cotton sheets, admire breathtaking views of our gardens, or enjoy a steaming hot bath in your oversized in-room tub* (there's a separate bathroom too!). However you want to relax on your luxurious getaway, our Splendid Super King Rooms have it covered. 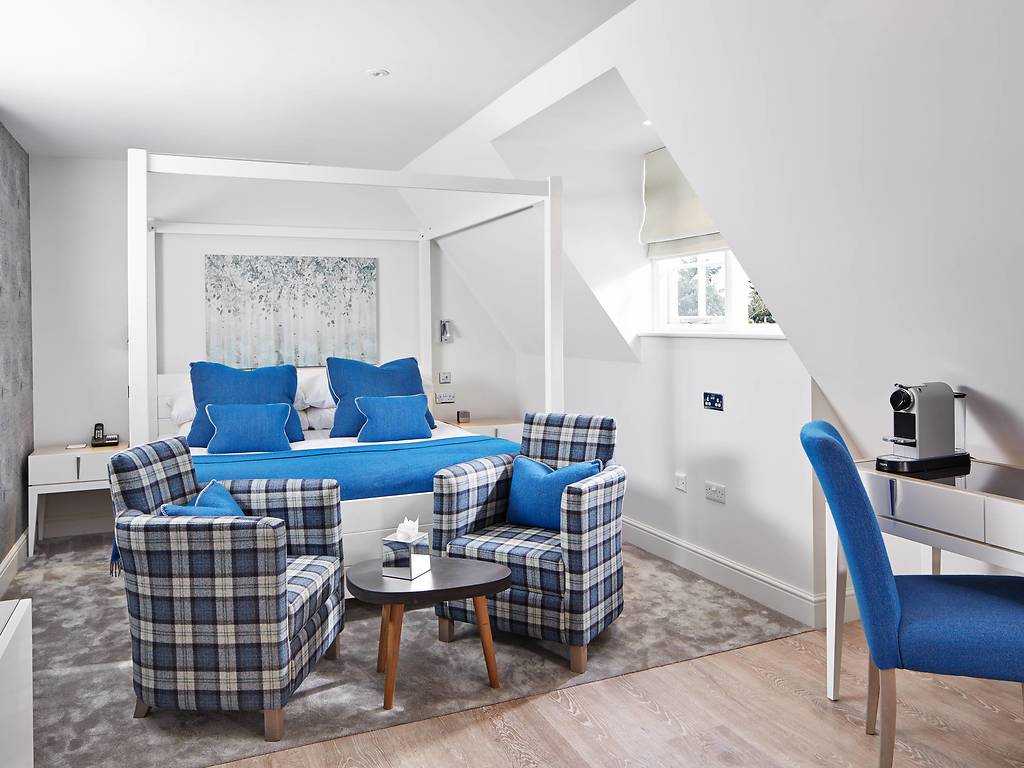 Averaging 55 sqm, the Master Suites are home to a spacious,  spacious bedroom and an opulent en suite bathroom. Admire the striking decor, sink into luxurious Egyptian cotton sheets and have a long hot soak in the bath with a good book - it's the little things! 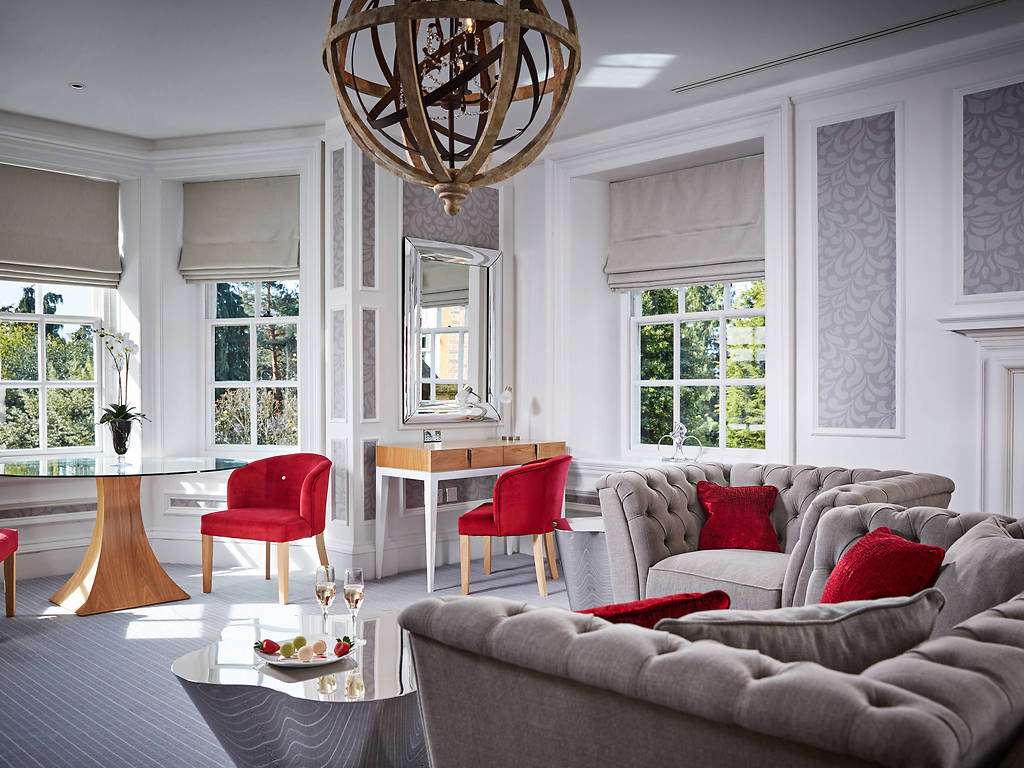 Combining influence from classic dishes with innovative cooking techniques and the freshest seasonal ingredients, The Oak Room Restaurant at Barnett Hill Hotel offers award-winning dining with service to match. Head Chef Lee Young was awarded 2 AA Rosettes after being with us for just 8 weeks - a dining experience not to be missed.

Committed to excellent menus bursting with exquisite flavours, The Oak Room Restaurant is a great spot for a light lunch or elegant dinner. Admire the beautiful oak panelling that adorns the walls, the feature ceiling, and beautiful views across the gardens. 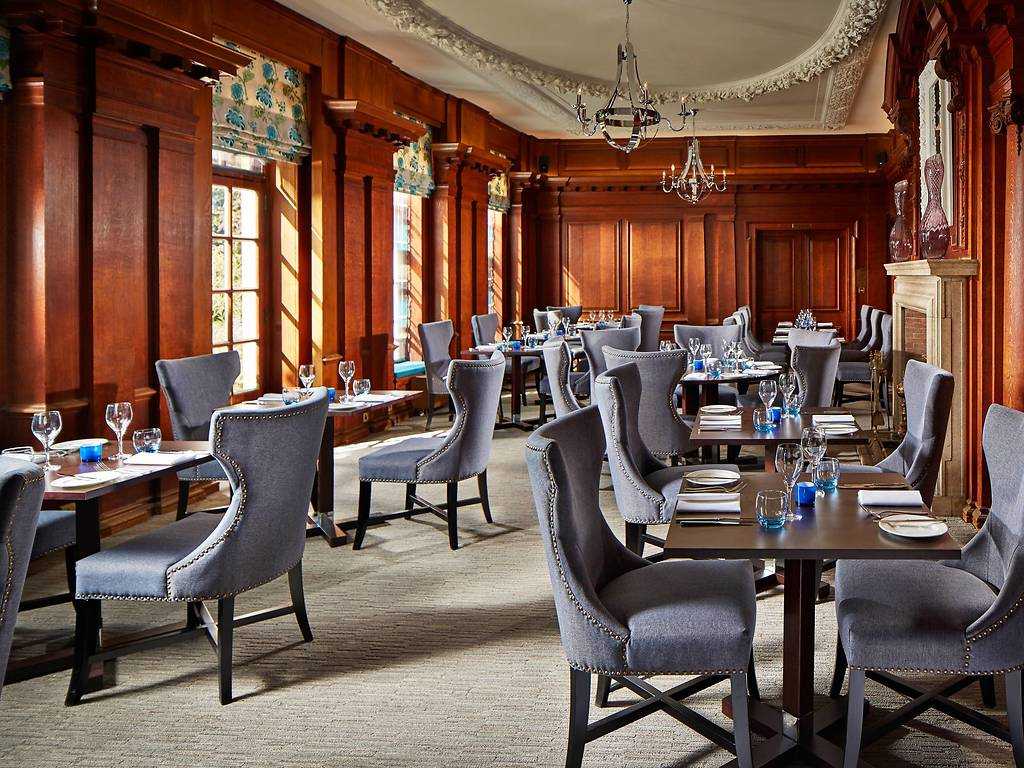 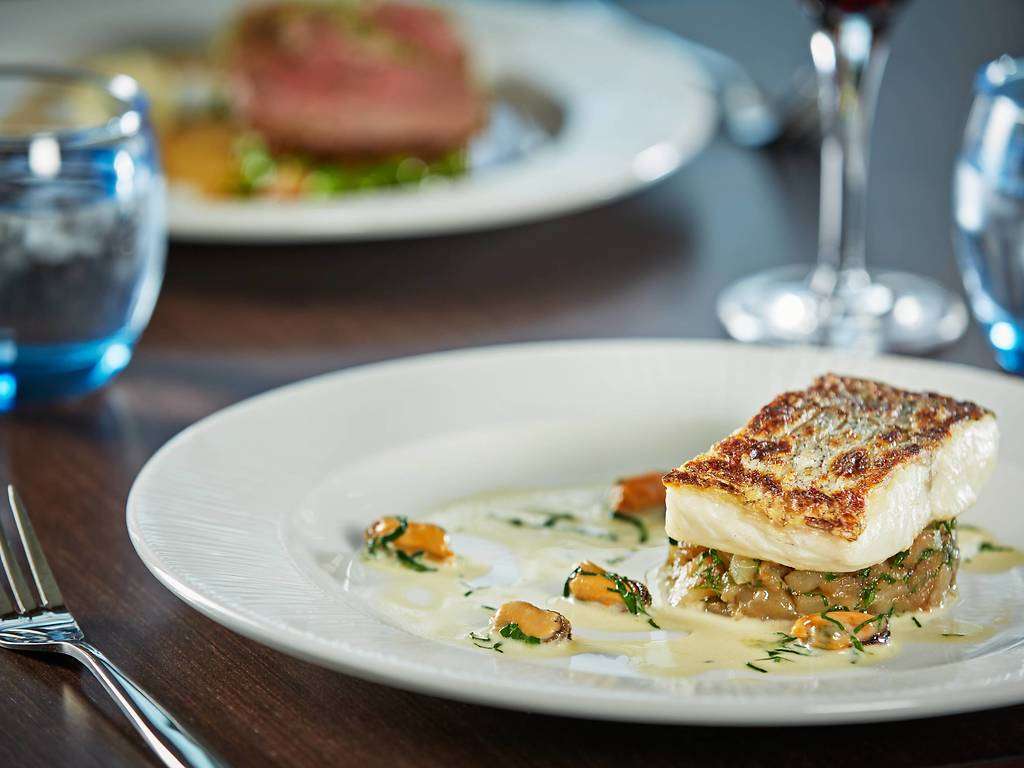 Indulge in the ultimate quintessentially British experience. With beautifully landscaped gardens and the Surrey Hills beyond, make the most of your indulgence with al fresco dining on the estate in the Summer months. Afternoon tea at Barnett Hill Hotel is extremely popular, so we recommend booking in advance.

They have a gluten free afternoon tea menu available.

Cosy up to an open fireplace, start your day with a refreshing cup of coffee with views over our estate or treat yourself to a couple of drinks before or after your meal in the award-winning restaurant. The perfect place for a light bite or aperitif, the cosy lounges at Barnett Hill are mini hubs of relaxation.

The nearest railway station is Guildford Station. There is a regular fast service for London Waterloo, which is approximately 40 minutes away, as well as regular trains from Reading, Gatwick Airport and Portsmouth.

Exceptional views and some of the best walking routes in the south of England await at the edge of our estate. They are so lucky to have such an incredible area on the doorstep and encourage you to make the most of it during your luxury getaway to the Surrey Hills. Have a look below for some of our favourite things about the breathtaking Surrey Hills Area of Outstanding Natural Beauty.

From short stories and poetry to grand works of art, these breathtaking landscapes have inspired creativity for centuries. It's clear to see how it earned it's place as an Area of Outstanding Natural Beauty.

The nearest walking path to our estate, this 9 mile (14km) walk through the Surrey Hills takes you through twists and turns of incredible wilderness with breathtaking views to match. Just leave Barnett Hill Hotel and head onto Blackheath Lane. Turn right at the end of the road and you will shortly arrive at the start of the walk.

Today cycling has become a cornerstone in fitness campaigns, with the London 2012 Olympic Games seeing a huge increase in participation across the UK.

Now it's your turn to take to the roads and explore the stunning Surrey Hills by bike! The guide offers 5 different routes to help you explore Surrey, with helpful tips and hints to get you well on your way...happy pedalling! 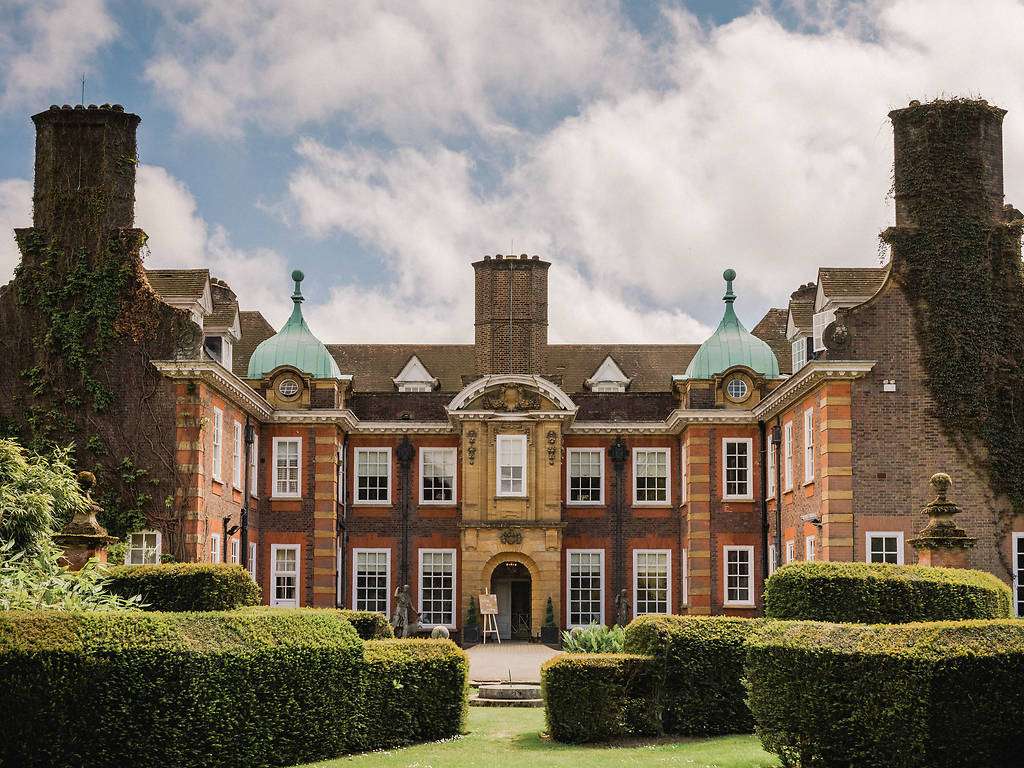 We stayed in the Courtyard, nice big rooms but small windows. Lovely bathroom. Afternoon tea disappointing but dinner was nice. The gardens are lovely.

A lovely building in a lovely setting. we were very happy with our room and afternoon tea was excellent however it is work in progress for the hotel. After dinner we wanted to relax in the library but it had a weird smell and there were dirty uncleared tables and some cardboard boxes on the floor. It was not welcoming. We went to the bar which was not what we expected, small , uncomfortable and men on laptops . we went to our room. Breakfast was ok but bread was not replenished and the fresh fruit was very stingy. Tea and hot water in flasks was not what I expected in a luxury hotel. it is obviously work in progress but I feel we should have been told as there were workmen wandering about, boxes in reception and a bar which apparently is in the process of being moved. The staff were all excellent and there is a lot of potential for the hotel but guests need to be warned about future works. I would return when the work is completed

Lovely hotel and grounds however, there were a number of negatives. We had to return our main meal on the first night as it was cold and the grilled tomato on the second night was full of vinegar and spoilt the meal. We were charged for items we had already paid for or were included in the off peak package deal. The bill we were presented with at checkout was 600. By the time the items incorrectly charged were deducted the actual bill was around 140. The 12% service charge on all food and drink I felt was excessive and the beauty treatment we booked in advance was cancelled due to staff absence. The staff were polite, friendly and helpful so it was a shame that we experienced so many problems during our 2 days at the hotel.