Beautifully restored to its former glory, boasting original features and individual luxurious bedrooms. Situated just three miles south of the historic city of Lincoln, the hotel sits within 88 acres of stunning parkland and lakes. The ideal venue to get the most of a city break whilst also enjoying tranquil surroundings, a delightful spa and award winning cuisine.

Stay in a Standard room and receive:

Stay in a Courtyard room and receive:

Stay in a Luxury Double room and receive:

Stay in a Standard Twin room and receive:

Branston Hall Hotel features a range of uniquely designed bedrooms each furnished individually and with the traditional flourish of a timeless country house. Many boast period features such as four poster beds, corner baths and suites, while all rooms include tea and coffee-makling facilities, high speed Wi-Fi, as well as flatscreen televisions.

Guests at Branston Hall can enjoy use of the hotel's swimming pool and gym, as well as full access the acres of landscaped parkland and lakeside trails.

The bar at Branston Hall Hotel is the meeting place for most prior to enjoying the dining experience in the restaurant. There's a warm welcome all year round. Especially when you can enjoy the unique atmosphere created by the log fire in the lounge during the winter. 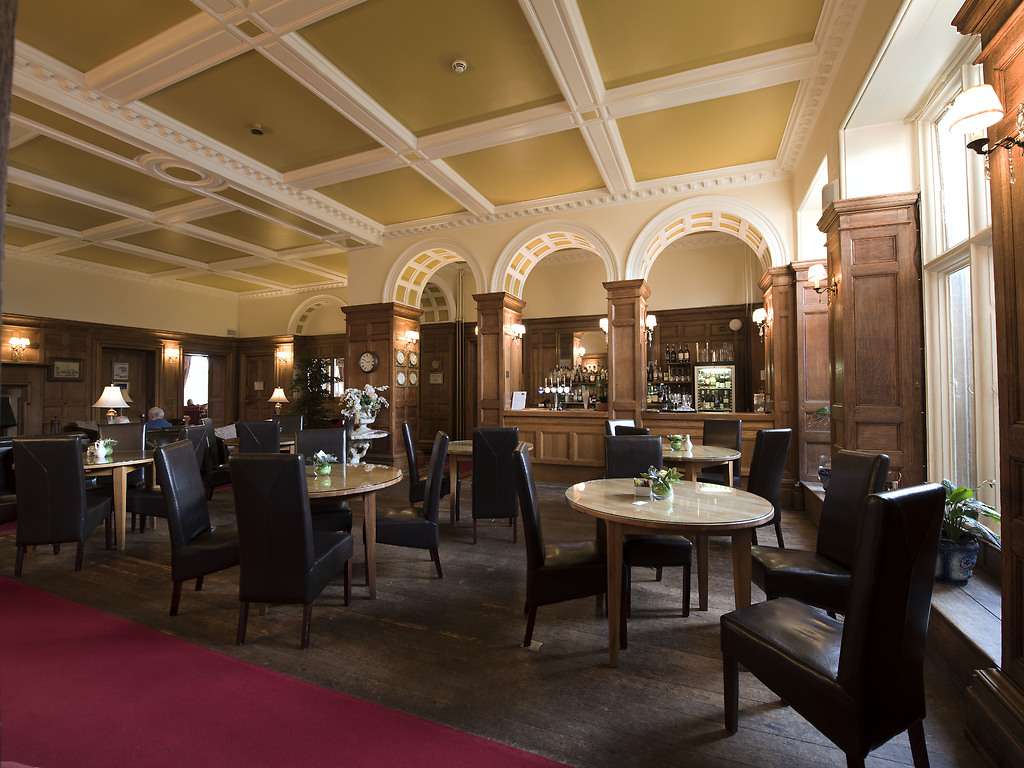 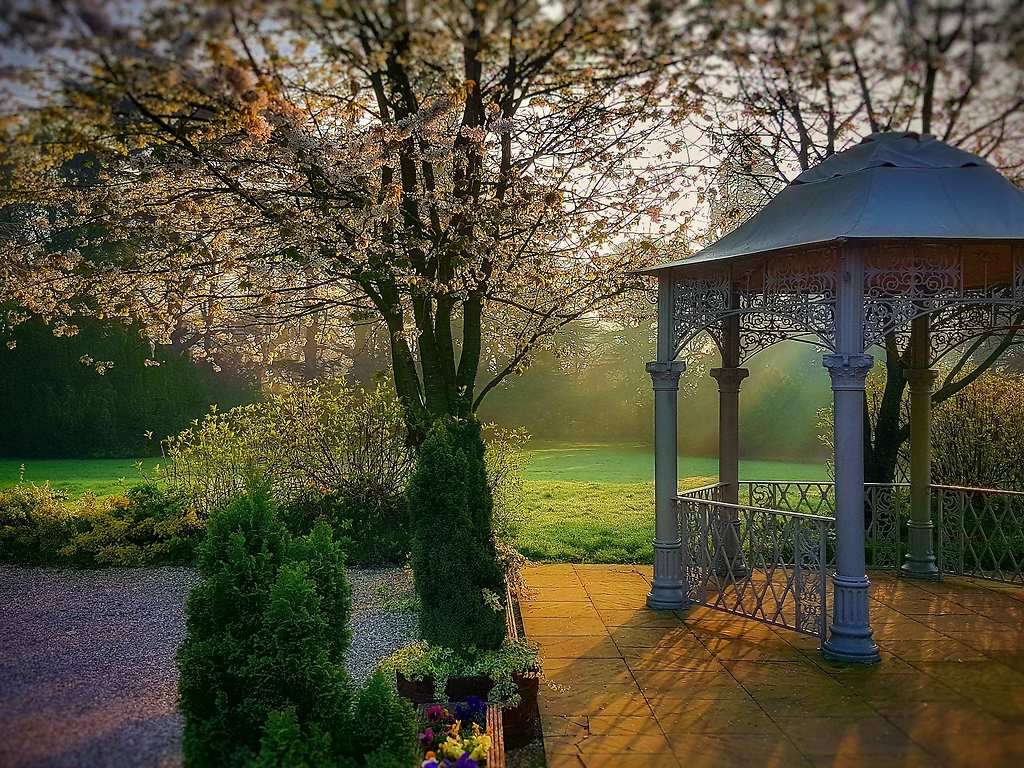 The Simpsons Spa is privately owned so additional charges are applicable. However the pool and sauna are free of charge.

In 1735 the original old hall was built for Lord Vere Bertie, son of the first Duke of Ancaster. In the early 19th Century the building passed into the hands of the Hon. Alexander Samuel Leslie-Melville, youngest son of the 7th Earl of Leven. As time went on Hon. Leslie-Melville had a vision of a grander residence. Enlisting the help of architect J MacVicar Anderson, they put together his visualization. Construction of the new hall commenced in 1884 and was completed in 1885. The old hall, still being in a good state of repair was made home to the servants and the staff of the Leslie-Melville family, with rumours of the two buildings being linked together by a series of ingenious underground passages.

On New Year's Day 1903, during the annual Goose Supper for the local tradesmen, fire broke out at the old hall. Despite a team of firemen fighting the fire for many hours the old hall could not be saved. However the firemen were still rewarded with the remnants of the goose supper that had so hastily been abandoned.

Branston Hall, like so many similar houses throughout Britain received its call up papers for World War II with the spacious rooms providing hospital wards and accommodation for medical staff. After the war the local council took over the hospital service, and by 1980 the building had fallen into disuse and was sadly neglected. The building was then in an ill state of repair and having had most of its original estate sold off was offered for auction.

This is not a pet friendly property

The hotel sits within 88 acres of stunning parkland and Lakes.

The Rooms at Branston Hall Hotel 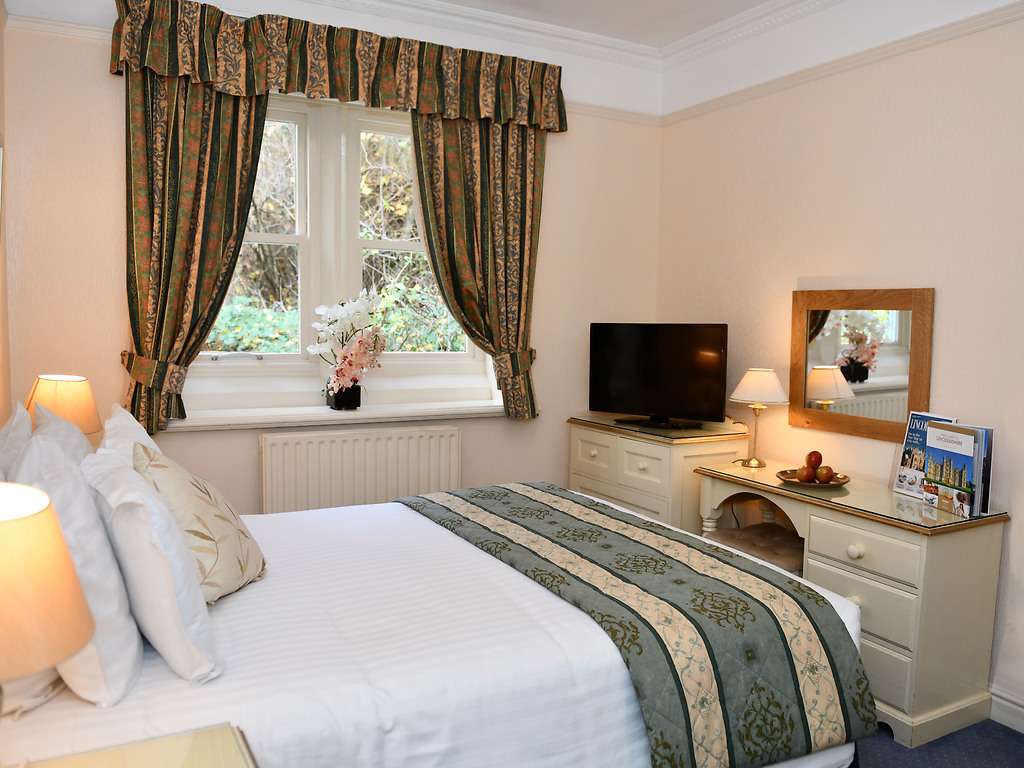 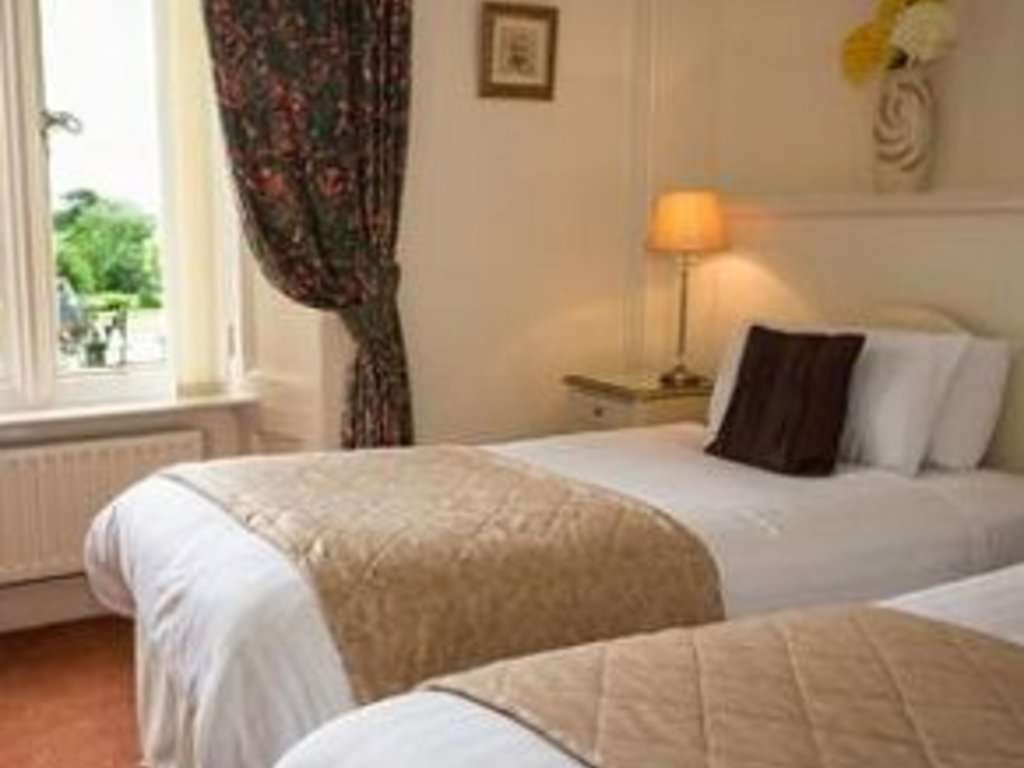 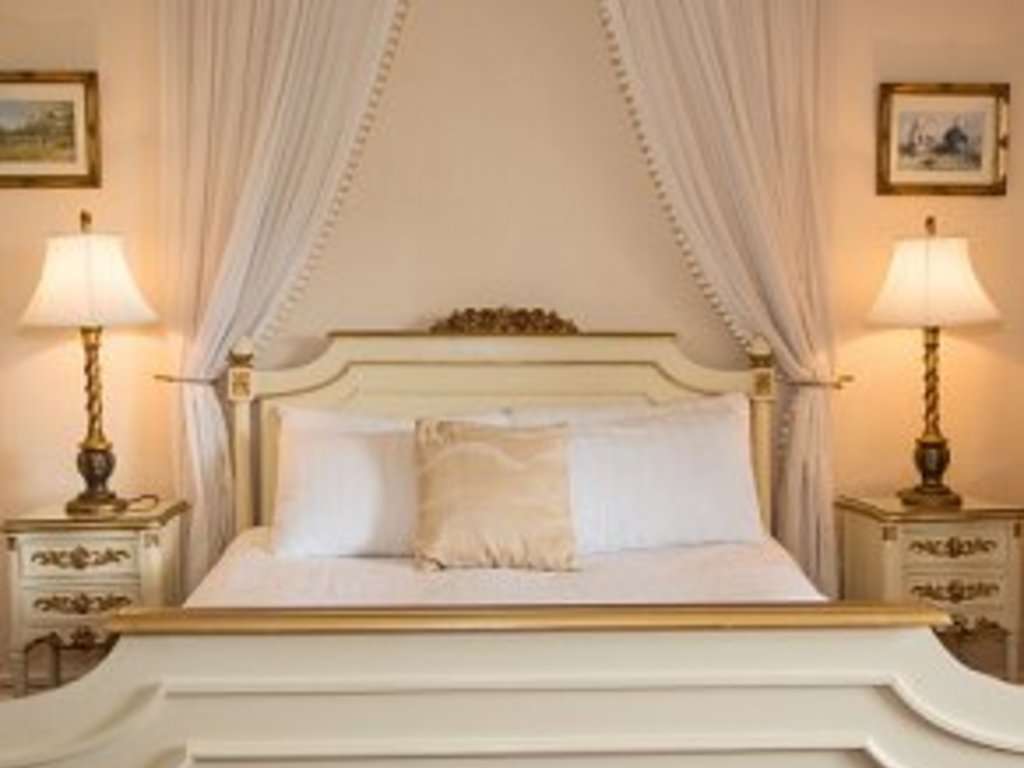 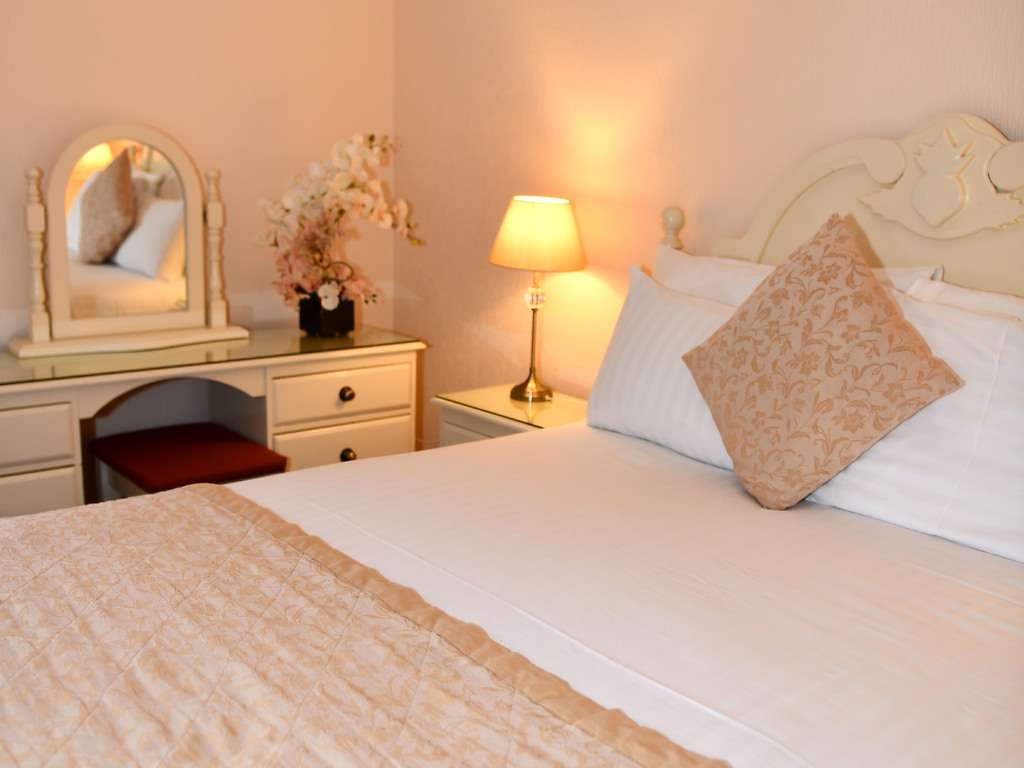 The Lakeside Restaurant has long been recognised by the AA for food quality and awarded a coveted AA Rosette for culinary excellence, now into its fifth year.

Along with award winning food they have an extensive wine list to complement your meal. The menu served combining traditional with modern inspirations from around the world.

Boasting elegant decor reflecting the buildings character and era, beautiful views over 88 acres of wooded parkland and lakes and excellent selection of beers and ales, wines and digestifs to complement their food.

12-2pm in the Restaurant and Bar 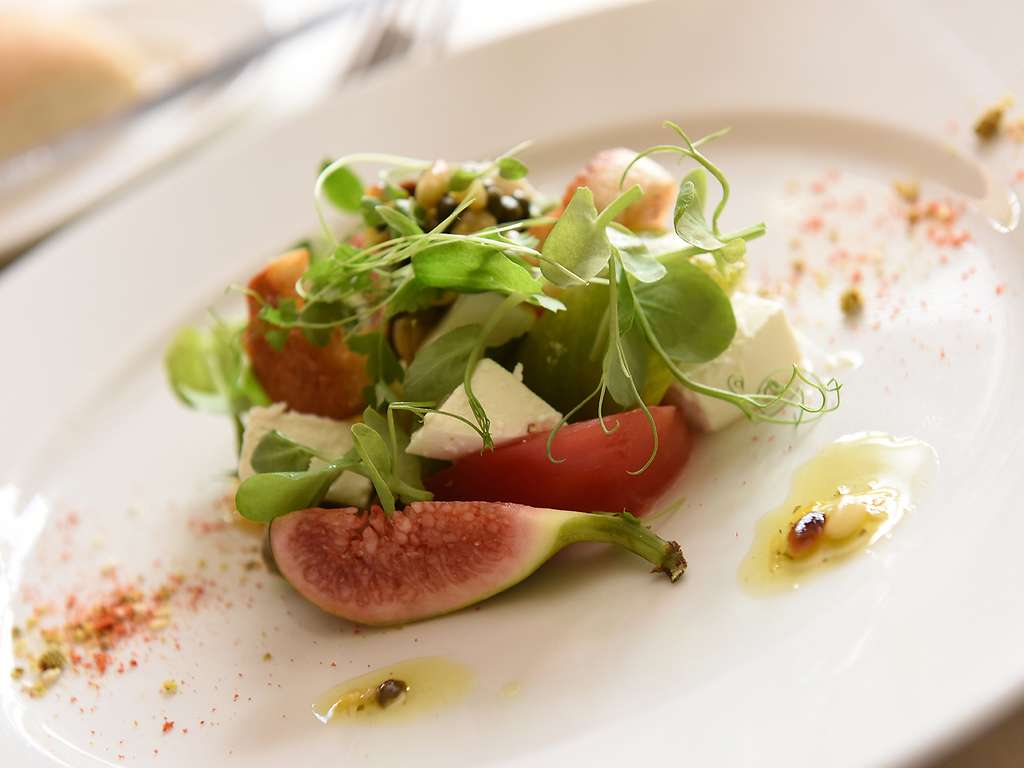 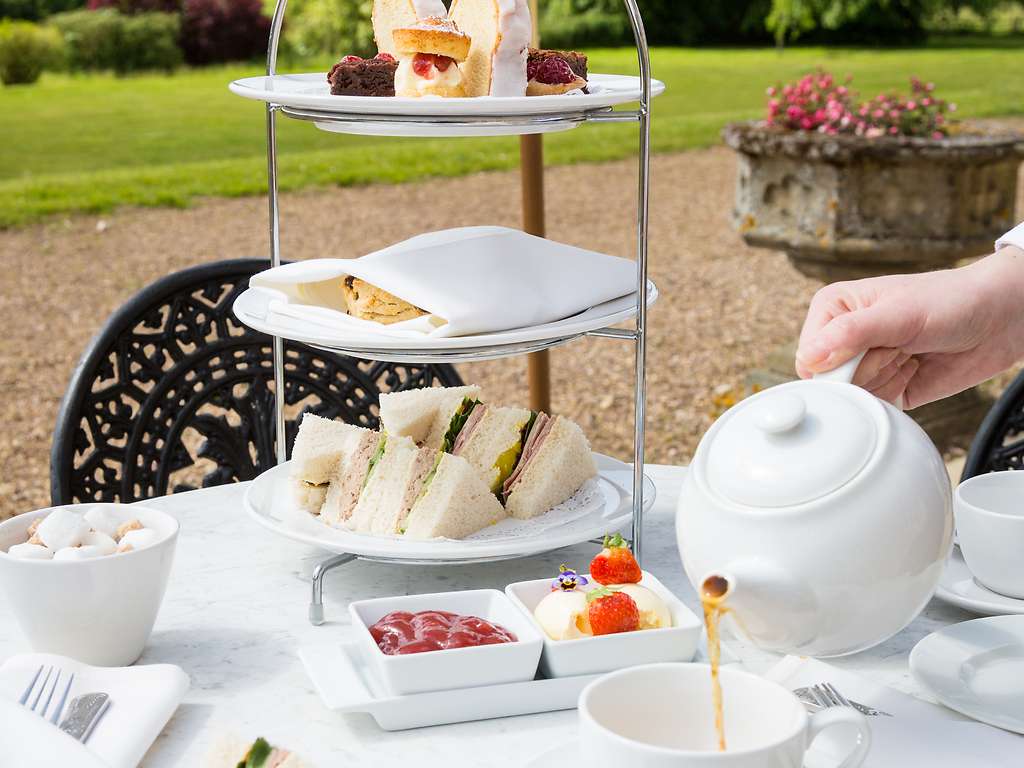 The parklands pool and leisure suite are available for use for all hotel residents. The pool hall also has a Sauna for your enjoyment. The impressive murals in this room set the scene. The heated pool is a great place to work out or just to cool down from a hot relaxing sauna.

The Pool is open 7am to 8.30pm all days except Tuesdays they close between 9-12 for cleaning and maintenance.

To complement the indoor swimming pool you will find the Fitness Suite with a small range of modern equipment adequate for a quick workout!

Simpsons located in the grounds of the hotel have created a rural spa retreat for both men and women to escape from the pressures of everyday life, a place for you to step into a world of complete sensory heaven where time is left at the door and a new journey begins…

Directions from East Midlands Airport 50 miles by road
Take A453 towards Nottingham and at main M1 roundabout take third exit towards Rathcliffe Power Station continue for about 7 miles and join the A52 towards Grantham. At the Bingham Roundabout take first exit signpost Lincoln. Join the A46 towards Newark/Lincoln.

When you reach the Newark bypass follow signs for Lincoln passing Newark Showgrounds on your right take the second exit at the roundabout staying on A46 for about 11 miles. At the next main roundabout on your left is a filling station be on right hand lane and take the third exit towards Lincoln passing Pennels Garden Centre on your left head straight on passing North Hykeham and head towards Football ground at South Park.

Turn right at the Roundabout passing Fire Station on your left heading towards traffic lights keep to the right turning right at lights. You are now joining the B1188 which will be signposted Woodhall Spa at the top of Canwick Hill keep left and the next village is Branston which is 2 miles away.

When you reach Branston and just before the 30 MPH sign Branston Hall is on your right.

The second largest county in England, Lincolnshire is one of the finest counties to tour at leisure. The wide spaces between the larger towns and the city of Lincoln give each community its own identity. All residential areas are most welcoming, presenting a full range of, pubs, town halls and local churches that host a variety of activities, many of which are compelling sights for the visitor.

The main cities and towns, in order of size, are: Lincoln, Grantham, Grimsby, Boston, Scunthorpe, Spalding, Stamford, Skegness, Louth, Sleaford, Gainsborough, Brigg, Cleethorpes, Bourne, Horncastle and Mablethorpe. Of course, several of these are on the East Coast of the county bordering the North Sea.
The City is at the heart of the county and only a short distance from Branston Hall Hotel. The most famous landmark of the city is the Cathedral.

[lincoln-tennyson] Lincoln Cathedral was reputedly the tallest building in the world for nearly a quarter of a millennium (1300–1549).It is highly regarded being one of the most precious pieces of Gothic architecture in the British Isles.

Lincoln is the centre for festivals and concerts, art and sculpture, boats and buildings. The High Street Quarter is the ideal place for shopping, with shopping centre and recently regenerated Waterside and St Marks Area. It's also a great place to grab a bite to eat or enjoy a coffee at one of the city's trendy coffee bars, and at night comes alive with the many exciting bars and clubs there. The Brayford Waterfront boasts sculptures and a public viewing deck.

There are boat trips on offer and a nine-screen cinema with all the latest movies. Evenings, the waterfront area has a very friendly, laid-back and welcoming atmosphere.

The famous Waterfront Festival that takes place in July, with plenty of great shows, stalls and much more besides. And finally, Lincoln's Cultural Quarter has 'The Collection', a great new museum that sees archaeological finds side-by-side with fine, decorative and contemporary visual arts. Lincoln Drill Hall is the city's premier arts venue, hosting an amazing mix of events.

Activities throughout Lincolnshire include thrilling theme parks rides, the resorts at Skegness, Ingoldmells and Cleethorpes always offer something for The Skegness Illuminations usually start towards the end of July in proximity to the Clock Tower, which was built to commemorate Queen Victoria's Jubilee, as do the Mablethorpe Illuminations.

There is a regular calendar of events in Lincolnshire, with some dating back over a century, with many very unique to their locality.

There are numerous art, antique, agricultural and entertainment festivals held at venues throughout the county during the year. Farmers markets are held regularly in the towns of the county, a visit is most rewarding; as here you will sample true Lincolnshire rural life.

One of the most famous is the Agricultural Show, first held around the year 1884. It is one of the largest agricultural shows in the country, and attracts some 100,000 people during its two days (the Wednesday and Thursday of the last whole week of June) at the Showground at Grange de Lings, a few miles north of Lincoln.

Dating back to 1742, possibly one of the country's most unusual auctions takes place in Bourne, a market town on the western edge of the Fens, on the Monday before Easter. This auction is to let the grazing rights of the Whitebread Meadow. Bidding takes place while two boys race toward the Queen's Bridge in Eastgate. The end dash is meant to be the equivalent of the falling gavel in an auction.

Events in Lincolnshire also include the turning on of Christmas lights at the beginning of December in Bourne, Sleaford, Skegness, and other towns, a Christmas Market is held in Lincoln. This candlelit street market operates throughout the town, and has, over the past few years, become extremely popular.

The Spalding Flower Parade, which is held in late spring every year, attracts visitors from across Britain. It was started in 1959, and a prominent feature of the parade is the colourful floats decorated with tulip heads which compete for a cup.

Corby Glen, in South Kesteven, is host to one of the country's oldest organised sheep fairs, which has been held every year since 1238.

The Haxey Hood village (located in the north of the county) competition is certainly one of the most unusual in the UK, and takes place every January, as it traditionally has for over 700 years. On the afternoon of the 6th January, or Twelfth Day of Christmas (if on a Sunday, it is held on January 5), a form of large rugby football scrum.

There is a mid-Lent fair held in Stamford during the week after Mothering Sunday. Showmen converge on the town and rides and sideshows fill the main Broad Street, the Sheepmarket and the Meadows for a complete week.

Some of the other rather unusual annual attractions include the annual Scarecrow Festival held in Tetford and Salmonby. (16 km south of Louth) in May, and the Belchford (7 miles north of Horncastle) Downhill Challenge which is held every two years, where soapbox racers race down the hill at up to 30 km/h. 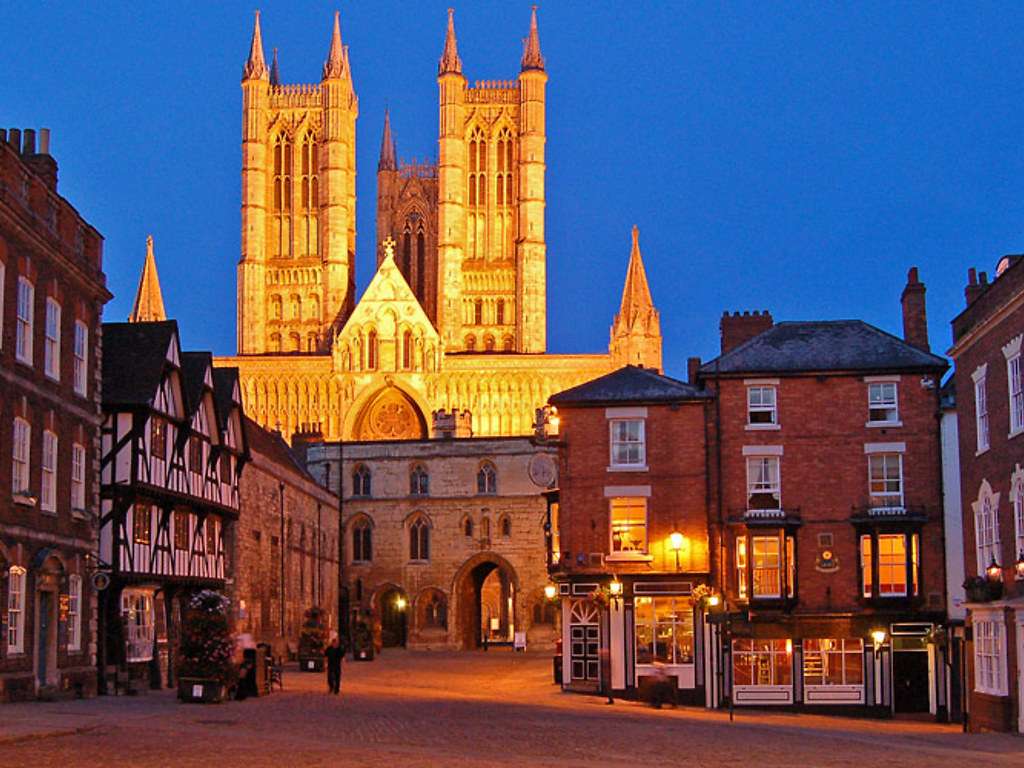 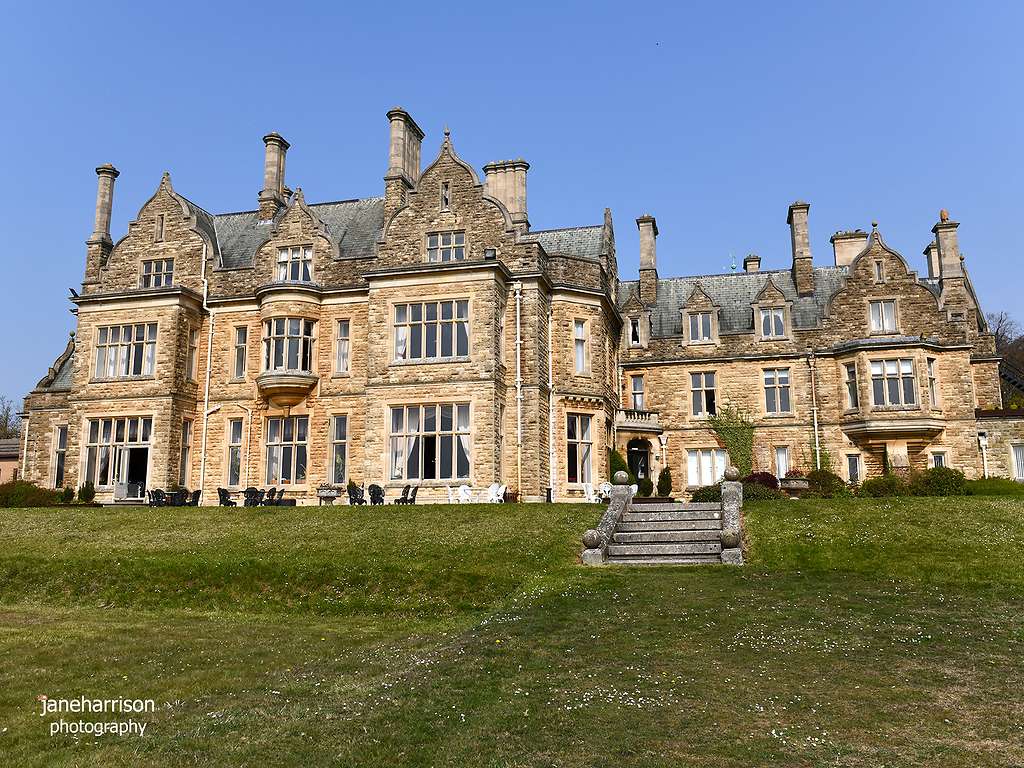