Set in 16 acres of parkland and once the family home of the great poet Percy Bysshe Shelley, this stylish 18th Century Georgian manor house has been transformed into a superb country hotel.  Step into nostalgic elegance with a modern day style and find an award winning restaurant, a wealth of original features, and comfortable bedrooms.

Stay in a Privilege room and receive:

Stay in a Privilege room and receive:

As well as relaxing lounges, the extensive grounds provide plenty of opportunity for cycling and walking exercise, but if you prefer to exercise indoors the cardio equipment in the Fitness room will keep you up to speed.

The hotel has an outdoor tennis court available for guests to use with complimentary racket and ball hire. 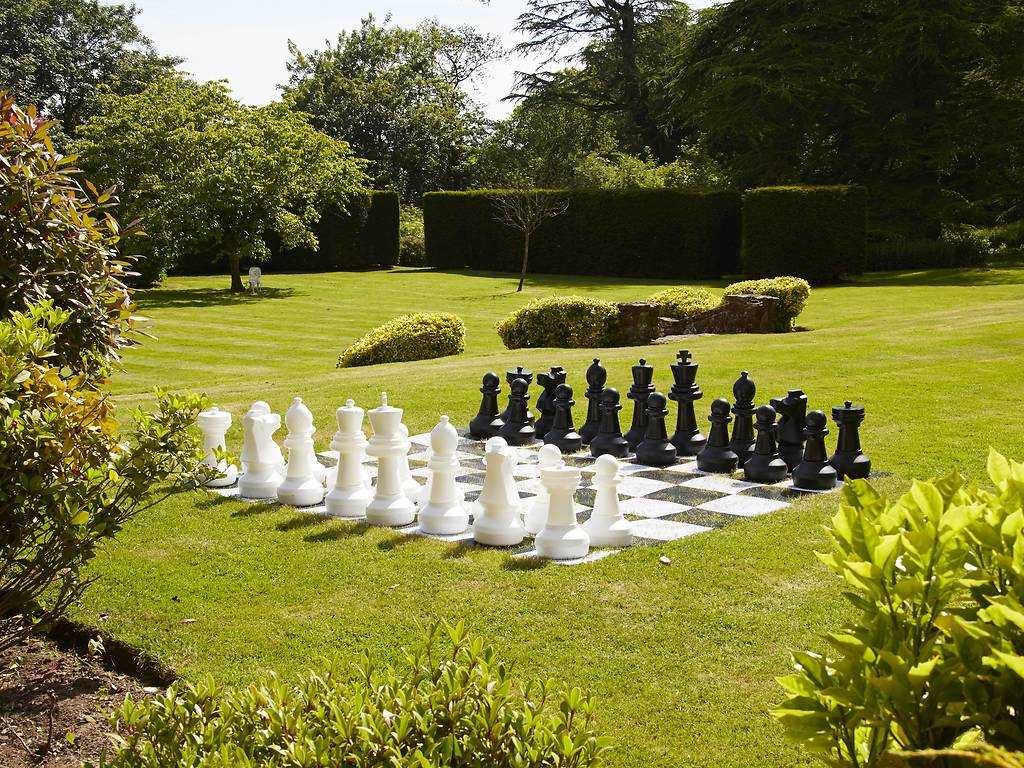 The majority of the hotel is wheelchair accessible and there are a number of adapted bedrooms.  Please contact us to discuss your requirements.

It is believed that the house was built between 1815 and 1825 by Anthony Bushby Bacon.  Perhaps the most famous resident was Lady Elizabeth Shelley, the mother of Percy Bysshe Shelley, who purchased Elcot in 1844 and moved there with her two daughters Hellen (family spelling) and Margaret. Hellen was fond of her brother Percy and in 1857 while she resided at Elcot she wrote a series of letters about her memories of their childhood together. These letters became the key sources in the many biographies that have been published about the poet.

Children are welcome and the hotel has a number of Classic Family rooms which can sleep up to 2 children.  Please contact our team before booking to check availability.  Additional charges may apply.

Elcot Park Hotel is a dog-friendly hotel which welcomes all dogs if they're well behaved and quiet.

There is a maximum of one pet per room. Dogs are not allowed in the public areas of the hotel, restaurant or bar. All dogs must be kept on leads within the hotel grounds.

A £15 per night charge will apply and guests are responsible for any damage caused. Please contact us in advance to advise that you will be bringing a pet.

The hotel is located on a slight hill overlooking the Kennet Valley with views towards Walbury Hill. Around the 16 acres of grounds there are trees, bushes and grass.

The Rooms at Elcot Park 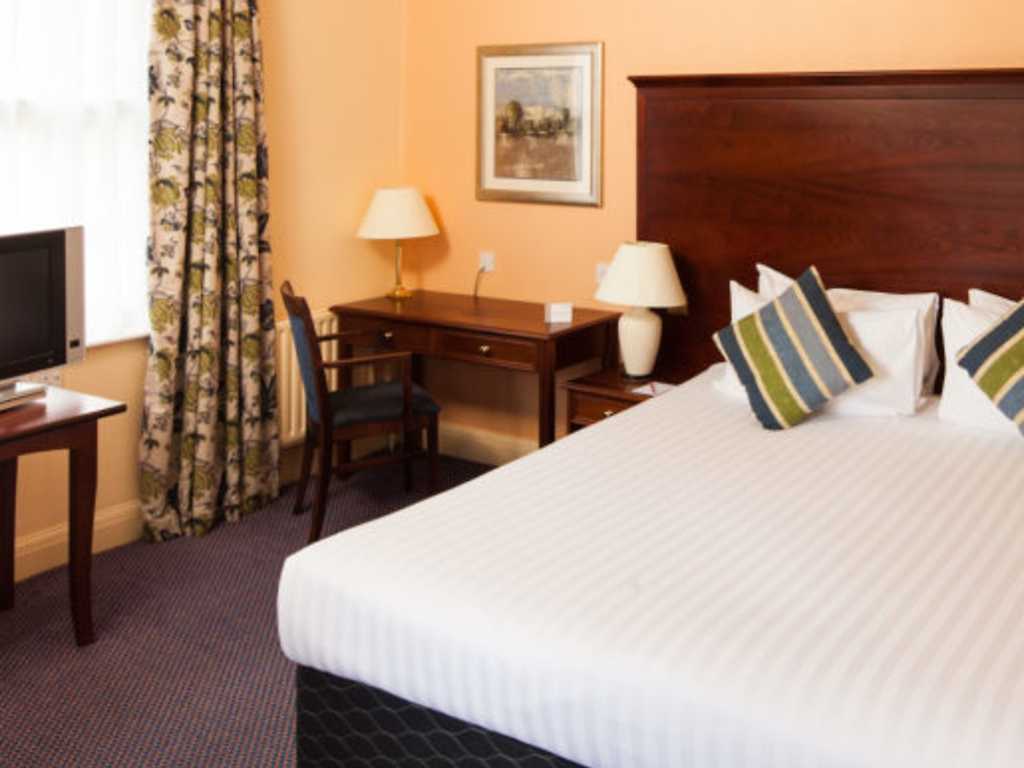 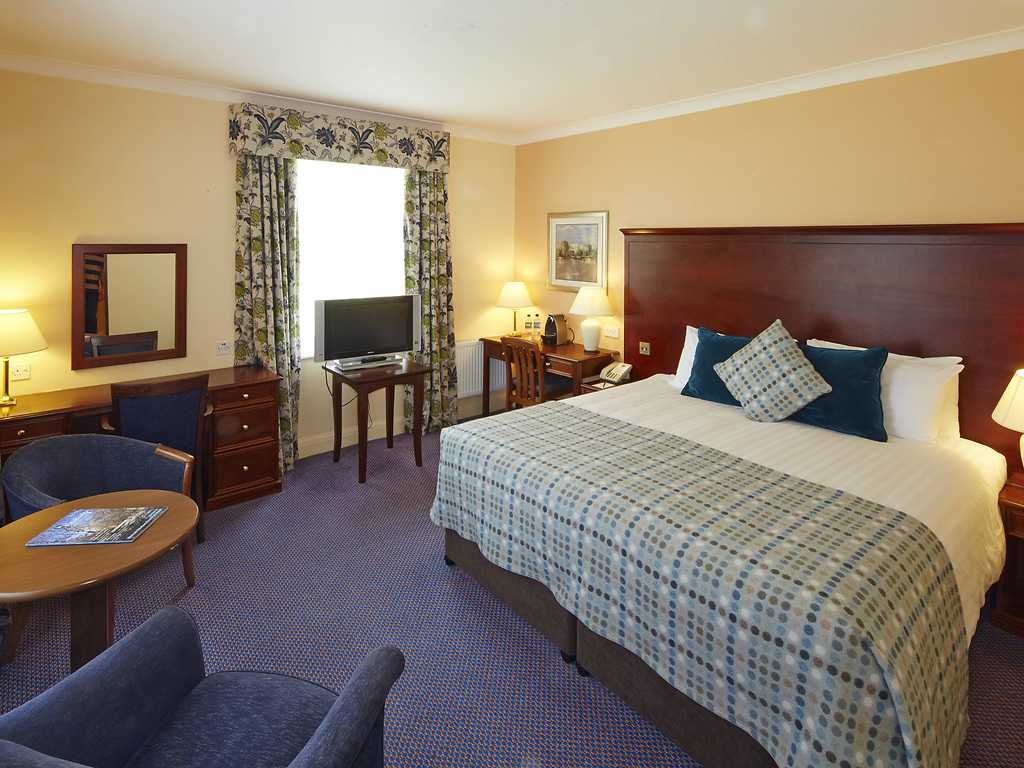 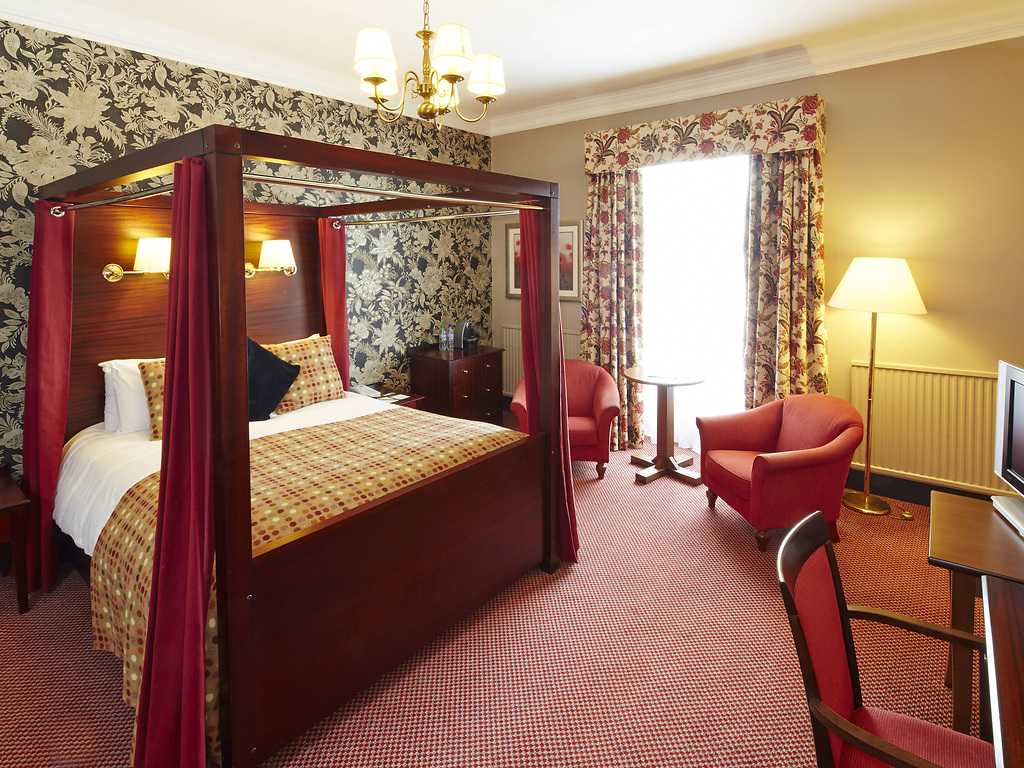 Soak up the atmosphere in the elegant restaurant enjoying views over the grounds. Choose from a diverse collection of mouth watering dishes prepared using fresh ingredients grown in the hotels own herb garden. 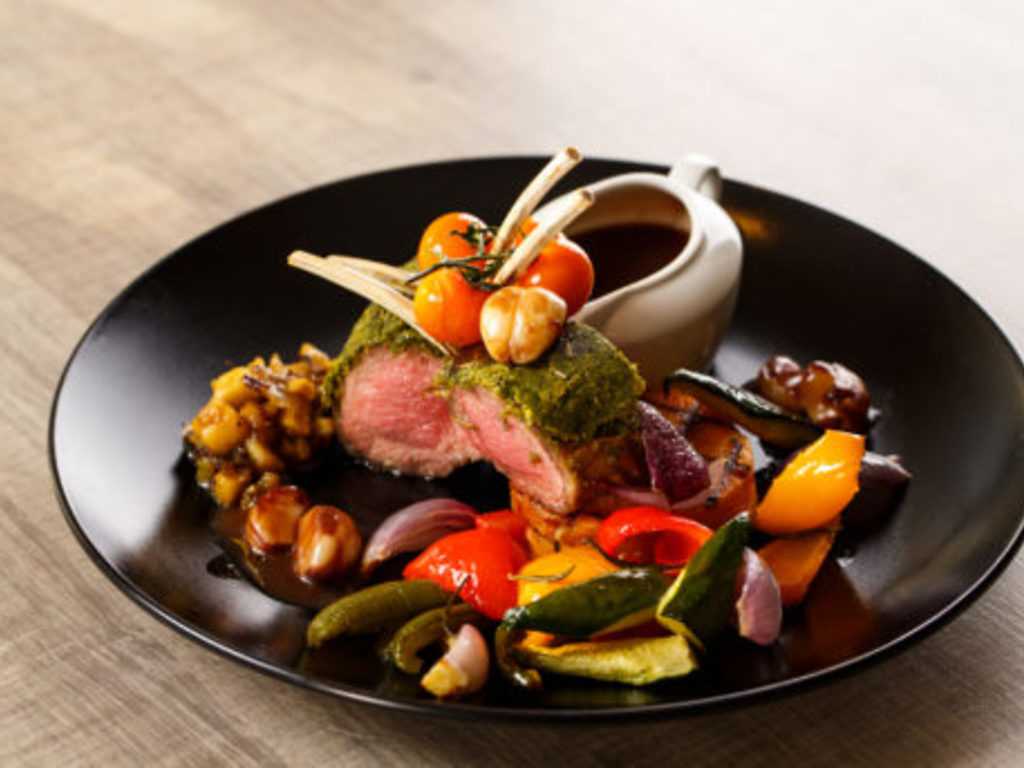 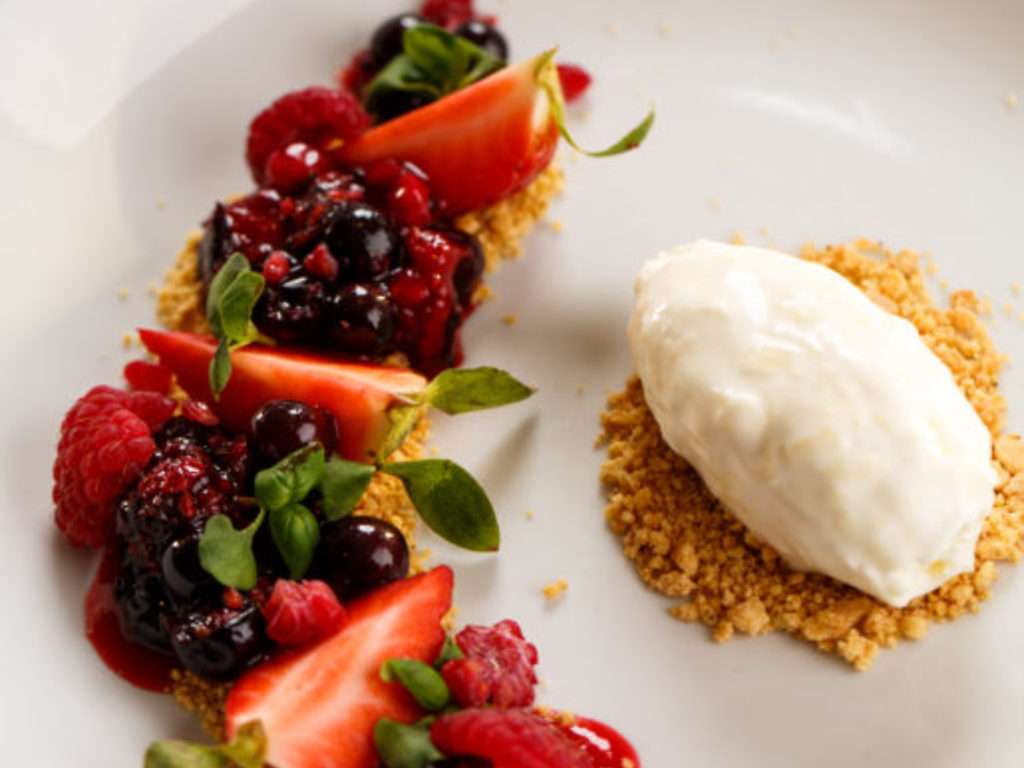 Newbury Racecourse is just a short canter from the hotel.  History lovers will find plenty to do with Shaw House, Highclere and Donnington Castles near by.

Newbury Wharf is a ideal for a peaceful walk or a boat ride on the canal. 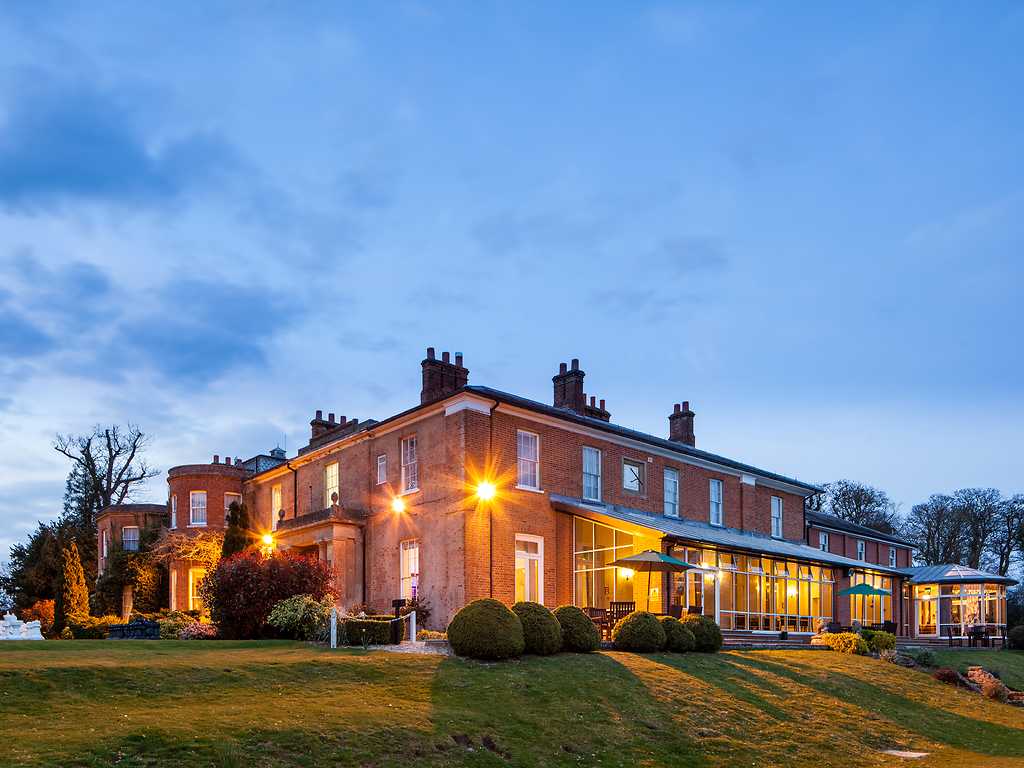 We went for a romantic valentine week end with an evening meal on valentines day. The food was amazing so we booked an evening meal for the next evening.
The hotel was close to places of interest so we had a lovely Saturday visiting stately homes.
The room was very spacious and clean.
Staff were very friendly and made sure we were comfortable.
Would visit again.

An hotel in dire need of repair and regular maintenance

This may, at first impressions, be a sumptuous 4 star hotel, but do not be deceived. Behind the veneer of a well decorated and welcoming reception area, oozing old world charm, lies a building and room accommodation that is desperately in urgent need of repair and maintenance.
Our room, No. 57, allocated on arrival, was found to boast the following 4 star luxury features:-
1) A W.C. which had a section of the porcelain rim, around the top of the bowl, glued on, no doubt after some accident during the past which had totally detached a section of porcelain approximately 100mm x 50mm. from the main body of the W.C. bowl. To say that the "repair" looked ridiculous would have been somewhat of an understatement. I have never experienced such a disgraceful effrontery to basic health and hygiene standards at an hotel before.
2) A bath which had been chipped in 2 places, the enamel surface having been totally removed in both areas to show the basic metal surface of the bath underneath.
3) Paintwork to skirting boards badly scratched and chipped after no doubt being in contact with a hoover, at least it seemed to indicate that the carpets had been regularly if not exuberantly hoovered. Paint pealing on the inside of the bathroom door.
4) Windows that apparently had not been cleaned on the outside for some considerable time, time being measured in not days, weeks or months, but more probably years. Net curtains adorned the windows, but in one particular instance they were totally superfluous as the window was so dirty on the outside no one would not able to see clearly through it anyway.
5) External paintwork to the windows looked as though it had not been attended to in the last 7 years, possibly even longer. the paint had pealed off in substantial areas consequently exposing the unprotected timber of the sash windows to the ravages of the elements. As a result of this senseless lack of essential maintenance the timber cills were now rotten in places and slowly starting to disintegrate.
6) A shower that, if you stood underneath it for more than a second, you would have run the risk of receiving third degree burns from scalding. When the water temperature control was turned on you either had scalding hot water on the highest setting or scalding hot water on the lowest setting. After this matter was reported to Reception we were advised that other guests had reported similar problems and a plumber had been called, they of course would not be available till the following day. Consequently, we had the opportunity of having only one proper shower during our thankfully short stay, and even then, on the morning of our departure, there was no control on the water temperature, it was simply not as hot as it had been previously. Whilst no doubt the plumbers attempts to reduce the searing heat emanating from the basic water temperature had been successful, no attempt appears to have been made to rectify the basic inability to control the shower temperature at the point of use, being the individual shower temperature control valve.

Whilst these gripes may seem exaggerated I can assure you they are not, and took photographs of the bath and toilet to prove matters should these statements be repudiated by the Hotel Management.

Whilst this review of the hotel is somewhat scathing, it is purely directed at the general fabric of the building and appearance of our specific room. The staff in the restaurant, bar and orangery (used for breakfast), could not be faulted and were excellent, Reception staff not quite so.

Location and grounds good but this country house hotel needs investment. The restaurant facility was very ordinary to be generous - described as an Orangery but really very ordinary. The staff were good but not "warm". The food at dinner however was very good. The room was spacious and reasonably good even if the wallpaper on the ceiling needed some attention. Bathroom very clean with good facilities.
Overall we left a little disappointed with our stay. Perhaps our expectations for the price were too optimistic?

The privilege room was excellent. The welcome from the hotel staff was really good. Even though there was a wedding party our stay was not in any way disrupted.
The Breakfast was very good but there really needs to be more choice of cereals, only two choices each morning.
Just a personal thing but not keen on the enormous, life size model of a black horse in the entrance.
Scary.